We finally made it to the weekend!! Do you have big plans to fill your days? Or maybe you intend on catching up on some R&R? Either way, I hope you enjoy it in the most fabulous of ways!!

Today, I am excited to welcome Author A.S. Crowder. She’s going to discuss her writing process & outlines. It’s a great post!! You’ll definitely enjoy her take. I certainly did!  🙂

Writing is hard. I’m sure that’s not news to anyone who’s tried it.

One of the things that helped me hold onto my sanity as I trudged through the work that eventually saw my first novel, EVIN, to publication and that helps me now as I wrestle with a new WIP is discussing the writing process with my fellow authors. We all do our work differently, and sometimes hearing someone else’s approach shakes the cobwebs free.

The part of my process that I’m asked about most often is outlining. I tend to view planning vs. pantsing (or discovery writing—writing when you don’t know ahead of time what the story is or what happens next) as a spectrum, not a binary. It’s not an either-or proposition. That being said, I tend to fall much more on the planning end of the spectrum than the pantsing end in comparison to the rest of my friends. My long projects always start with an outline—sometimes several.

One of the comments I tend to get from people who rely more on discovery writing is that outlining sucks the spirit out of a draft. The perception, I think, is that because I outline, I go into a project knowing every twist along the way—that every move is planned out ahead of time.

That is not how it goes.

When I sit down to outline, my main goal is to figure out the overall trajectory. I try to answer a few major questions. Who are my major players? What do they want? What’s complicating their getting it? Do they succeed? This gives me the skeleton of my story. The bare bones—and only that.

My next step is to brainstorm scenes. Usually I have a few specific scenes in mind, some moments that I know I want to include in the draft. This isn’t the minutiae. It’s not the intimate character moments. These scenes are typically my large set pieces. Major conflicts, significant plot reveals, establishing moments. I arrange these scenes according to my bare bones. What has to happen first? What can’t happen yet?

Once I’ve got this figured out, I plan out rough chapter breaks.

At this point, I know roughly what I want each chapter to do, how each chapter moves the story forward. I’m able to divide the story into somewhat manageable chunks.

What I’m really doing is moving from most general to most specific. I want to know the big picture before I really sit down to pound out the first draft. The smaller details will come later.

My rough chapter breakdown gives me an idea of the timeline for the story. I’ve got the basic sequence of major events and a decent sense of when I’m going to give time for readers to come up for air or when I want to let a moment simmer. It’s a little bit like laying out dots to connect. At the very start of the process, they’re so far apart that I might not be able to see the next step. The rough chapter breakdown draws them a little closer together.

Once I have my rough breakdown, I go back through and fill it in. I add in some of the smaller moments that I want to connect. This is also where I make note of things like story seeds that I need to plant for later payoff. If, for instance, I know that someone’s true colors are going to be revealed in chapter seventeen, I’ll have notes in chapters before that indicating what clues need to be dropped and when. If I need to make sure that someone has their hands on the MacGuffin in time to use it, I’ll put a note in this more expanded outline. The expanded outline usually looks something like this: 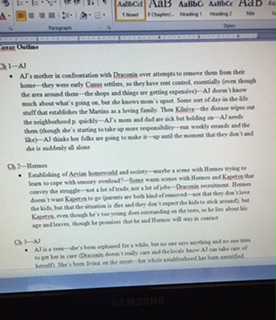 Most of the time, this ends up being the outline that I refer back to as I write the draft. There’s a lot of detail—reminders regarding who’s where and what’s happened so far, plans for what has to happen next and what has to occur before I can move on to the next thing. But there’s still a ton that’s missing. I know who the characters are and what they want in a broad sense, but their personalities don’t really take shape until I start writing the draft. I know who’s going to have to interact with whom, but not how they’ll get along. I know the sequence of events, but the mechanics of how I get from point A to point B aren’t laid out. I start writing and try to guide the characters towards the outcome that I think I need. And then, sometimes, I realize that the plan doesn’t work and I have to let things go where they’re going to go and then go back and adjust my outline later.

That’s the thing with outlines that I think most people who don’t use them have a hard time wrapping their heads around. I spend a lot of time coming up with my outlines. And sometimes I still end up tossing out chunks of my outline. In my current WIP, for example, a character and her arc got dropped from the story after the outlining phase. The outline isn’t a yoke. It’s not some unstoppable force that controls the story. It’s a reminder of my intentions and of what I wanted the story to be.

For me, outlining a story is a necessary part of the process. For you, it may not be—or your way of doing it may be very different from mine.

Whether you’re a planner or a pantser or somewhere in between, I hope that this insight into how the process works for me helps you get a better sense of what goes into crafting a story, either what it takes to craft your own or what your favorite authors have put into their work.

Thank you so much for stopping by and visiting with us. Please continue to show your support to today’s guest with likes, shares, and comments. Also, do yourself a favor, connect with A.S. and check out her books!

This site uses Akismet to reduce spam. Learn how your comment data is processed.

“The Nightmare” by Tyler Scott Hess

All reviews & buy links will be posted to the Book Reviews page.

If you wish to support my endeavors, donations are always appreciated. They help keep the site going. All contributors will receive a special thank you.

A special thanks to the following contributors: